The forest dominates in Värmland and this is where the popular Finnskogleden trail runs. It was these connected forests with a rich fauna and good fishing that specifically attracted Finnish people here in the 16th century on the lookout for new places to live. The trail follows their old track and meanders through the borderlands between Sweden and Norway. We describe here the southern half of the trail, from Morokulien to Røjden.

Signature Trail Värmland is one of STF’s 12 signature trails.

Show off your Värmland!

The trail starts in Morokulien, pretty much right on the Swedish-Norwegian border. The trail then crosses back and forth over the border all the way to the end in Røjden. Some sections are flat and easy to hike, while others take you up to the top of mountains and are a bit more physically demanding. Once at the top, your reward for the exertion is majestic views across forests, mountains and streams. You are hiking on the Forest Finns’ old paths. We are reminded of this history when passing the settlements, the old Finnish crofter’s holdings. On day four there is an opportunity to clean yourself, as the trail goes right next to several lakes. The fifth day is a long one, with many kilometres to cover; it can be split into two days by those who wish to do so.

See and do along the trail
The Forest of the Finns has very good fishing waters, it might be a good idea to bring a fishing rod. The area also great for canoeing or kayaking, if you want to rest your legs for a day.

Don’t miss
There is a souvenir shop, tax-free shop and tourist information at the start of the trail in Morokulien.

Hiking in Norway
Since this hiking crossing the border to Norway, please consider the right to roam in Norway.

Day 1: Morokulien-Håvilsrud: 17 kilometres, 6–7 hours of hiking.
Stay here: In a tent at a campsite in Håvilsrud.

The start of the hike is at the peace monument in Morokulien. The stage starts with an easy section where there is limited variations in height. The trail follows gravel forest roads and paths. There is a resting place with a wind shelter by the lake Breitjennet, just before the halfway point. Water can be taken from streams along the trail, but no food is available. There is a campsite at the end of the stage.

Day 2: Håvilsrud-Mitandersfors: 18 kilometres, 6–8 hours of hiking.
Stay here: In a tent in Mitandersfors.

The stage starts on a gravel road, which turns into a path after a few kilometres. The trail is surrounded by forest and numerous small lakes. Once you have managed the ascent up to Källerashöjden, you are treated to a view over the lake Varaldssjön. Approximately three kilometres before the end of the stage there is a resting place with a wind shelter and toilet, which could be an appropriate campsite if you do not want to hike all the way to Mitandersfors. Fill your water before the start as there is limited access to water on the first part of this section. There is no food on offer.

The section starts with an ascent to Bengtstorp and continues north, going both uphill and downhill, still in forest on forest paths alternating with forest roads. Three kilometres before the end of the stage you reach Ritamäki, where there is a café during the summer months. There is a cabin owned by the Norwegian Trekking Association (DNT) in Lebiko for those who want an alternative to sleeping in a tent. The key to the cabin is purchased via DNT. Water can be taken from streams along the trail.

Day 4: Lebiko-Øyermoen: 12 kilometres, 4–5 hours of hiking.
Stay here: In a tent in Øyermoen
This stage of the trail passes several farms situated in a rich agricultural landscape, all established by Forest Finns. The places you pass through include Abborhögda, which, in 1994, was named one of the ten foremost agricultural landscapes in Norway worth preserving. The flowering meadows are maintained in the same way they have been since time immemorial. June is a good month to hike here if you want to enjoy the floral splendour. There is a toilet and water in Abborhögda. No food available on this section, water can be taken from streams along the trail.

During this section, you will get to experience many beautiful landscape formations from the Ice Age, such as kettles and moraine banks. The pine forest becomes dominant again after that. When you get close to the end of the stage and the lake Røgden, there are several good places to pitch a tent along the lake shore. The final stretch of this section is easy to hike. It is a long day of hiking that can be divided into two with an extra night in a tent near Bråten. The trail is mostly on a footpath, mixed in with some passages on a forest road. Water can be taken from streams. In Røgden there is a convenience store and café.

The area around Røgden has more smoke cabins that anywhere else in the world. A smoke cabin is a house with a fireplace but no flue, where the smoke was used as a heat source. After a kilometre of hiking you reach Purala, where there is a very well-preserved smoke cabin. There is a café during the summer. After Purala, the trail leads heads steeply uphill towards Moldusberget; once up on the mountain, the view is magnificent. The trail continues relatively flat towards the end of the stage. Water can be taken from streams along the trail. An alternative campsite near Løvhaugen is Aborrtjärnsberg, approximately five kilometres before Løvhaugen. There is a toilet and water available.

With the exception of some shorter stages, the trail is on forest paths. Several areas along the whole of Finnskogleden are military historical sites. Among other things, during World War II there was a refugee route close to Backsjöberget (about halfway). Norwegians were guided at night to safety in Sweden through these forests. The refugee route was never discovered and it was possible to use until the end of the war. Water can be taken from streams along the trail, there is no food available. There is a convenience store at the end of the stage. 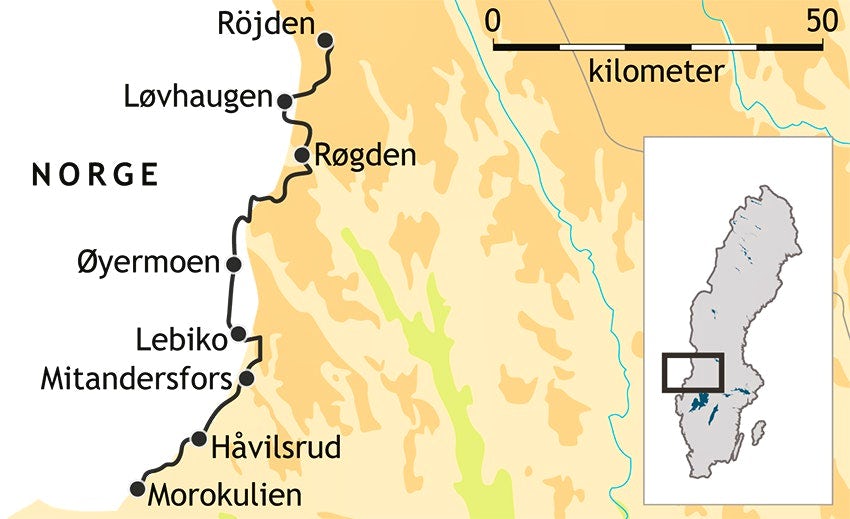 Transport to the trail

The trail markings differ depending on whether you are hiking in Sweden or Norway. In Norway, the markings have a grey base with blue paint on top. In Sweden, they are orange. 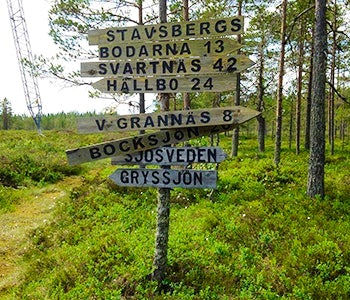 "I loved the sections on narrow paths in the middle of the majestic pine forest." 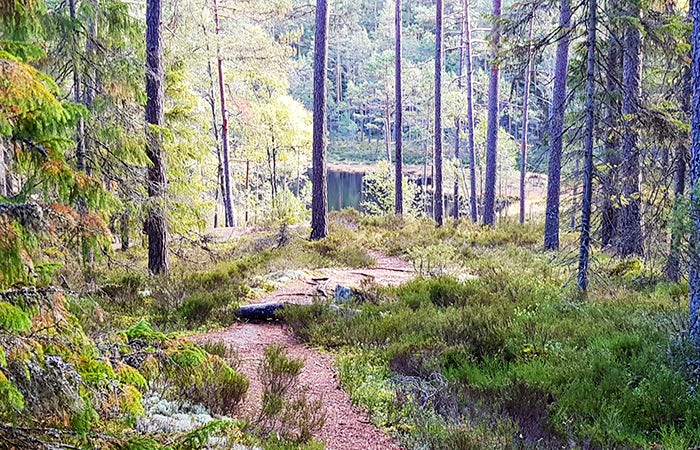 What makes the12 signature trails distinctive is the beauty of their surroundings and that they are characteristic of their part of the country. Together, the 12 trails paint a broad picture of what Sweden has to offer in terms of... 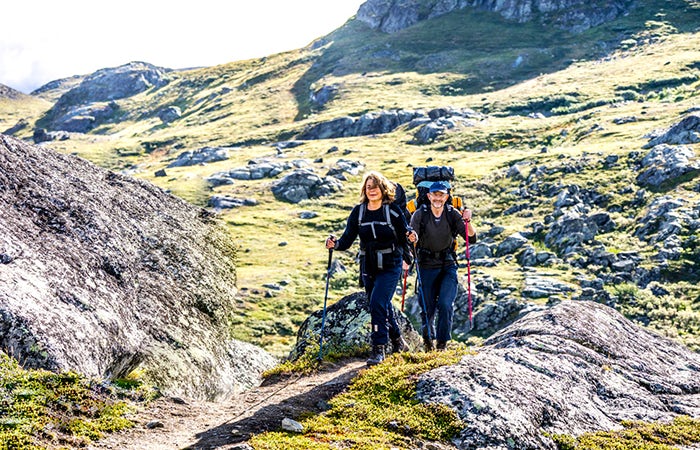 The Swedish mountain range, which stretches from Treriksröset in the north to Dalarna in the south, offers fantastic hiking opportunities. Thousands of kilometres of marked hiking trails await you. 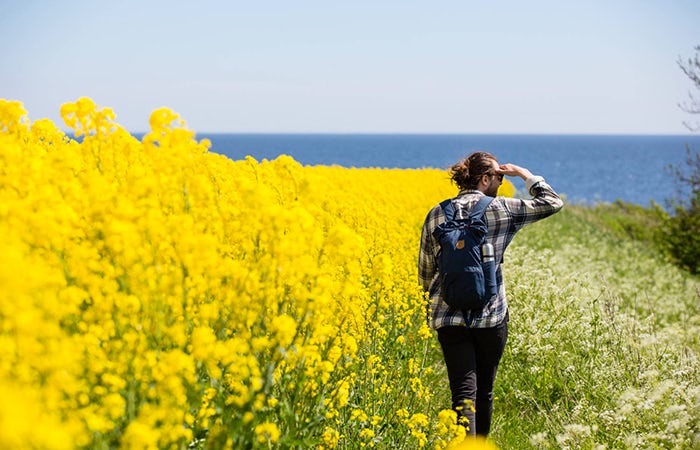 Sweden is full of paths and trails suitable for hiking where you have time to discover nature at your own pace. Stroll along narrow paths in the birch forests of Skåne or hike along the coast on barren rocks by Kosterhavet.