Abisko has long been renowned for its Midnight Sun and Northern Lights. STF Abisko Turiststation worked with travel guides as early as the 1960s-70s, but it wasn’t until 2000 that  “Northern Lights in Abisko” was packaged for the first time.

Our Northern Lights success story really begins in 2002 with Japan and a man called Hirohisa Makino. For several years, our site managers had wondered why there were so many Japanese who traveled to Abisko. Makino¸ a Northern Lights fan, answered the question during a visit to Abisko in 2002, by saying “Don’t you know that Abisko is the best place in the world to see the Northern Lights? Everyone else knows about it.” This sowed a seed to plan for future Northern Lights experiences.

In 2004, a Japanese TV team decided to send live broadcasts of Aurora Borealis and Aurora Australiensis (the Northern and Southern Lights) simultaneously. Abisko was the place chosen for the Northern Lights, and Antarctica for the Southern Lights. The timing was perfect for Abisko – the whole sky broke up into a “great northern light” seen by 17 million Japanese people! In Antarctica there was a blizzard.

In 2005, Makino was engaged as a Northern Lights guide, giving us good contact with the Japanese market. But it was another Japanese person who really made the pole tremble completely. One late night in November, a knock came on our front door and a frozen, tall, leather-dressed Japanese man stood outside and just said “Aurora”. He had flown all the way from Tokyo because of the rumor that Abisko had “probably the best Aurora”. Then things happened very quickly: the first Northern Lights camera was set up, our Northern Lights product was developed and, on February 23, 2007 STF Aurora Sky Station was inaugurated. 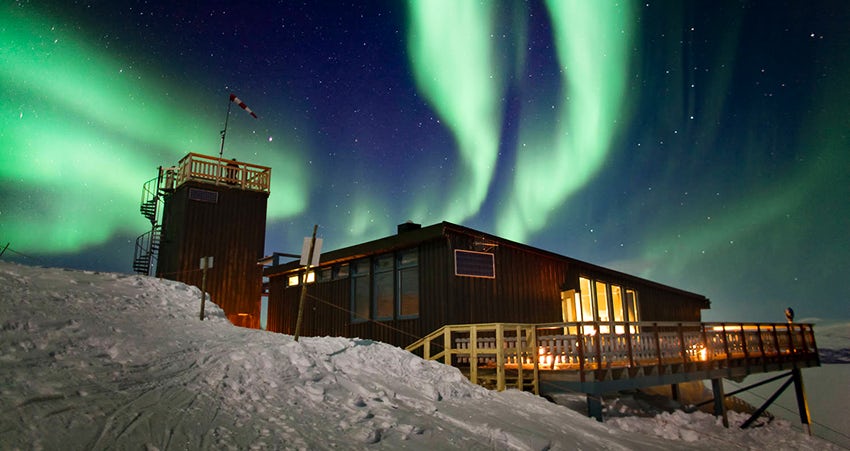 Are you more than 10 people planning a conference, family reunion, school trip or perhaps a training camp for the sports team? Complete the form and your request will be sent to your selected accommodation, which will get back to you with a quotation to suit your group!